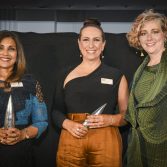 A life-saving app aimed at teenagers at risk of self harm has just won Gold at the Design Business Association Design Effectiveness Awards 2019.

Over 60% of users have used the ‘Calm Harm’ app more than once and 93% report a reduction in the urge to self harm after completing one of its exercises. It’s been downloaded around a million times across the world in more than 170 countries.

Free to use and designed to be discreet and anonymous, the app offers young people options such as distraction techniques or breathing techniques to help them overcome the urge to self harm. 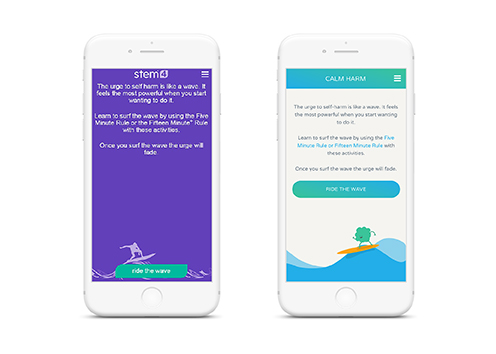 Sixteen year old India says Calm Harm has made a huge difference to her. “When I have an uncomfortable situation, or start to get panicked, or have an urge, I will get my phone, I will choose an activity from it like ‘express’ or ‘distract’ or ‘comfort’, and I’ll have a go at it, and if it doesn’t work the first time, I’ll have another go and pick a different activity, and then I’ll log it in my journal and write down how I was feeling and what triggered it, so that the next time, I can go look at it.” You can hear more from India in the DBA film here.

Dr Nihara Krause is founder and CEO of stem4, the charity behind the app. “Self harm is a major issue at the moment. It’s a behaviour young people use to communicate something – most often communicate distress – and we do need to provide some sort of tool to manage that, because our traditional services are very stretched. As a result, the threshold for acceptance for treatment is very high, and providing a digital tool that young people can use that is validated and follows scientific principles, is actually something that is very beneficial.

“The collaboration with HMA has made a huge difference to the effectiveness and distribution of the app. They worked with young people to get an idea of what would be appealing to young people. Because the app is so user friendly, it has been downloaded across the world in about 171 countries, and we have currently just under a million downloads. When we first released the app we had 24,000 downloads, and promotion of the app has primarily been by young people, through social media in particular.’

Nicola Tiffany is from HMA “Calm Harm is an amazing project to work on and the difference the app and stem4’s work in general is making to people’s lives is just incredible. Winning a Gold DBA award and getting recognition for the part that design played in its success is extremely rewarding and I am so proud of the HMA team for delivering such a fantastic project.”

Founder and CEO of London and Partners, Laura Citron is one of the FTSE 100 judges from the DBA Design Effectiveness Awards 2019.

“Unfortunately, self harm among young people is a really serious issue and I think I and the rest of the judges were really impressed by the way this team had used design to make something really effective and had involved young people in the creation of the design, that was clearly very powerful, and that they had achieved so much on such a small budget. Hugely impressive.”

“For this demographic, for teenagers, we know they are linked to their phones like umbilical cords and it’s quite normal for them to go to their phones, or to their friends through their phones, or to services, for everyday things like shopping or socialising, but also to get help about very personal sensitive issues. And the team who designed this were really sensitive to that and to the fact that people wanted to be anonymous – in the way that they designed, in the way that it collected digital information, and in the way that they designed a logo, that it wasn’t immediately obvious what it is – they had really understood how vulnerable young people use services on their phone.”

“In this case we can see that it’s design that’s having a really big impact on how powerful this app can be. This is a hugely important issue and we know that there are many many young people who can’t access face to face counselling services for whatever reason, so to be able to have an app that’s free to use that can help them to resist the urge to self harm is incredibly important.”

The Design Business Association (DBA) is the world’s most vocal champion of the role of effective design in the creation of business growth. The most important way of communicating the value of design is by measuring its true effectiveness.

The annual DBA Design Effectiveness Awards are both prestigious and authoritative, covering the broad spectrum of the design industry by measuring entries against their own design brief metrics and not against each other.

By integrating business aims and objectives from the start of the partnership, you set the stage for a transparent and accountable relationship between client and designer that provides the best creative and commercial environment for success. Award-winning case studies serve to demonstrate the excellent value for money and return on investment that a coherent, well-thought-out and professionally executed design strategy can achieve.

The deadline for entries this year will be Friday 27 November 2020. Click here to find out more.