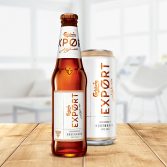 Carlsberg: A story of brand reinvigoration

Carlsberg’s gross profit was declining, and it had been for four years. They were struggling to keep up with the endless pitch of new craft beers arriving on the scene. That was until a new design took Carlsberg back to its Danish roots with simple Scandinavian style. A 170% increase in distribution points in only 14 weeks, Carlsberg UK and Taxi Studio took home the prestigious Grand Prix Award for the brand reinvigoration of Carlsberg at last week’s DBA Design Effectiveness Awards.

The Grand Prix is presented to the most exceptional entry amongst the Gold DBA Design Effectiveness Award winners.

Says Chairman of the Judges, Andrew Summers, “Carlsberg’s story shows just how design can turn around an ailing brand. A new proposition and premium rebrand oozed style and simplicity and have taken Carlsberg back to its roots. In a remarkably short time, Carlsberg turned from decline to growth, capturing the hearts of consumers and retailers.”

A story of brand reinvigoration 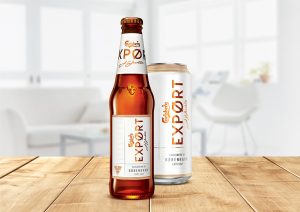 Carlsberg was having an identity crisis. For millennials, the beer was known for its humorous advertising but little else. It lacked relevance in a world of discerning drinkers who are increasingly clued up about different beers. Premium outlets had started to shun the brand completely, favouring it for seemingly upmarket rivals and if it did manage to hold its position on the shelf, it would be priced low as a cheaper option compared to the likes of Peroni, Birra Moretti and Brooklyn Lager. This was having a detrimental impact not just on sales, but staff morale too.

Although the UK is the biggest market for the Carlsberg brand, the drinking market in the UK itself has waned. Over the last five years, the standard and premium lager market has shrunk by 3.2 million hectolitres, taking almost £300 million out of the category. The industry has reacted by slashing prices, which has had a negative impact on profits.

As the fourth largest brewer in the world, the first to discover a purified yeast for brewing and the creators of the pH scale, Carlsberg are experts. But all of this was lost in the haze of its mainstream image, with the brand now seen as lacking relevance and credibility.

Something needed to be done to reinvigorate Carlsberg. The answer lay in a new proposition and premium rebrand by Taxi Studio.

From Denmark With Love 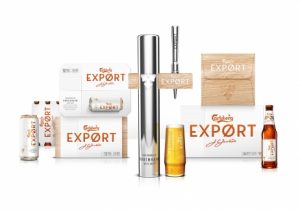 In the UK, people associate Scandinavia with smart, happy, good-looking people, a love of nature and style. It’s seen as an effortlessly cool place, and by focusing on the brand’s Danish roots with the new proposition ‘Carlsberg From Denmark With Love’, Carlsberg could translate the premium, high-quality nature of the beer.

Carlsberg Export was chosen to lead the new proposition and the backbone of its new design centred on the Dannebrog, a military symbol in a simple cross system. Using a blend of colours and textures inspired by the Danish concept of hygge with copper, wood and ceramic white, the result was a brown bottle, white label and copper-toned wording. It sends out a clear message: Premium.

Scrapping the green bottle in favour of brown was a bold move. Green glass has been a mainstay of the brand for 170 years, but the brown bottle gave consumers a more crafted, quality perception.

Carlsberg had three objectives with the rebrand – bring back distribution losses from outlets, stabilise profit growth and establish a premium brand. In just 14 weeks they not only achieved all three, they in fact delivered significant growth. 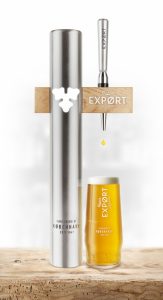 Before the new packaging, Export had 3,240 distribution points in Grocery customers. This jumped to over 9,000 in only 14 weeks after launch – a 170% increase in a remarkably short time. It’s important to recognise that the new distribution points are all considered the ‘right’ kind for the Carlsberg brand vision. Significantly, Export has managed to gain a place on Sainsbury’s shelves having been delisted for five years. These big wins, including being relisted in Waitrose, have helped stabilise gross profit and they have since grown by 2% on every hectolitre sold.

In Impulse customers the Carlsberg Export brand has grown distribution by over 10% to now be available in over 43,000 distribution points. And a wider halo effect is being felt by the Carlsberg brand with gross profit growth up on the previous year.

Carlsberg Export also has the highest pence per litre against competitors such as Stella Artois, Budweiser, Kronenbourg and Amstel. It is deserving of the price difference because brand perception has increased – the statement ‘More stylish than other brands’ was up by 9%.

All of these successes came within just three months without any other communications support. Carlsberg has earned its stature based purely on its clear, contemporary, beautiful design, and has won the hearts and minds of trade customers, consumers and the internal audience alike.

View all of the 2018 winning case studies at effectivedesign.org.uk and sign up to receive details about entering the Awards via awards@dba.org.uk