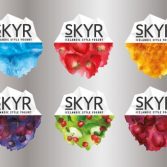 skyr: An innovative presence in a crowded market

In recent years, the lid has been lifted on low fat and fat free yogurts that often contain lots of sugar. Arla aimed to transform the world of yogurt, by creating a product that’s naturally low in sugar and nutritious with high protein, no fat and 50% more milk. Arla wanted to become a ‘champion of dairy’, so it needed to do more than sell yogurt, it needed to be revolutionary.

One of its biggest challenges was the huge competition. The yogurt aisle is crowded and most of the products aim to influence the consumer at shelf, with around 80% of purchases being influenced in store at the last six feet to purchase. And it needed to transform the perception that Greek or Greek-style yogurts are the healthiest options. Arla wouldn’t have long to challenge these assumptions – just six feet – so they needed a ground-breaking design and turned to agency Elmwood. 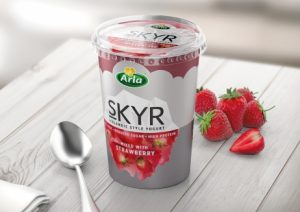 Far from wanting to blend in with the others on the shelf, Arla needed a unique approach. Aiming at the health conscious over 55s and busy young professionals, there was an opportunity to empower and inform its consumers.

As a new product, it’s not easy to dig out heritage, so Arla drew on its Scandinavian roots, hence the name skyr. It provided the perfect foundations for simple packaging, which helped convey its natural ingredients and stand out from the complex products in its competition, think Onken, Yeo Valley, Daneo.

The designers worked with this to create a striking design that’s also calming – a balance that’s not easy to strike. The idea of the iceberg draws on the Nordic landscape and evokes the feeling of something pure on top with something refreshing, delicious and full of energy underneath. It definitely provides a welcome contrast to a dollop of yogurt with fruit on a spoon. 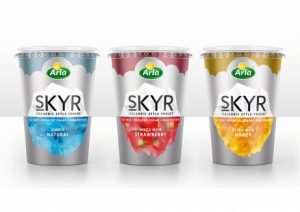 In a market filled with fierce competition, Arla has grown to be the 12th largest supplier of yogurt in the UK and skyr has proved so popular production is struggling to keep up with demand. Gaining listings in the UK’s big four supermarkets and beyond, it has engaged consumers and ensured cut through at the point of sale, with 70% of skyr sales adding incremental value to the yogurt category.

Arla skyr became a £12.2 million brand in 13 months, and is predicted to become a £21 million brand in just 20 months. By appealing to a broader target audience than anticipated, its 3% penetration target was smashed, reaching 8.3% a year after launch. The stand out appeal created by the design at the crucial shelf fixture was key to turning recognition into purchase, with aided awareness for skyr being extremely strong at 45%.

The great news for Arla farmers is that they will see more of their milk being utilised in a product that has proved to actually add value to its category, creating opportunities for their own growth.