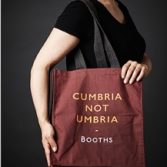 Money bags: How design turned a legislative headache into a money-spinner

When you’re faced with a legislative headache – like the introduction of the 5p carrier bag charge – apply creative design thinking and turn it into a money-spinner. That’s what Booths and Smith&+Village did and it won them a DBA Design Effectiveness Award. 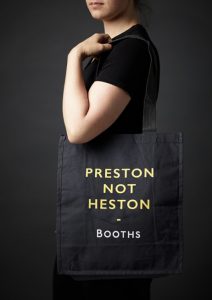 A pearl of an idea

New legislation, introduced in 2015, saw shoppers in large stores charged 5p for every plastic carrier bag they used. It was something of a headache for Booths, as for other multiple retailers, throwing up compliance, tax and customer communications issues that the business could well do without.

As Booths’ design partner Smith&+Village says, “Gnarly issues like this often prove to be the grit in the oyster that makes a pearl of an idea.”

Their solution to this challenge for Booths is a classic example of how creative design thinking can turn a problem into something unexpectedly successful: how effective design can be a money-spinner.

The fabric bags they designed in response have attitude, are loved by consumers and have become true icons of the brand. The five designs combine simple typography with Northern wit, turning humble carriers into walking billboards that owners use day-in, day-out. Customers are now promoting the brand in ways Booths’ minimal advertising budget couldn’t have stretched to. Although this is a path well trodden by high-end retailers, it was not one that more every day retailers like supermarkets had ever ventured down in a deliberate way. 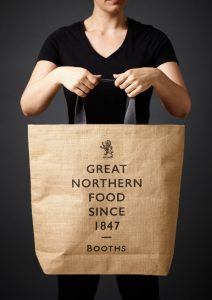 Smith&+Village’s simple idea to implement that strategy, to introduce fabric bags that become icons of the Booths brand, rather than just things to put shopping in, has had a remarkable effect on the perception of the brand and on its bottom line.

Sales of their fabric bags are up 510% since their introduction, generating sales worth over £230,000 in 12 months and essentially creating a new product category, where there had not previously been one. For every £1 invested in design, £9 has been received back in sales so far.