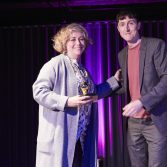 At the recent Design Week Awards held in Illuminate at the Science Museum, Deborah Dawton, DBA Chief Executive, was presented with the prestigious Hall of Fame accolade for her long-standing and ongoing contributions to the design industry. The honour also went to Rama Gheerawo, Director, The Helen Hamlyn Centre for Design and Reader in Inclusive Design.

Described by Design Week as an accolade that ‘recognises individuals within design who have made a significant contribution to the industry; have provided inspiration and incisive thinking; or who have simply created consistently brilliant work. It aims to acknowledge people who are still making a key contribution to design today.’

Deborah said, on accepting the award “Whatever I can do at the DBA to keep you at the top of your game, is my mission. So keep doing what you do, reach ever higher in your aspirations because that’s motivation for me and the amazing team at the DBA. Thank you Design Week for this award. I’m honoured and humbled by it.”

Here’s what Design Week had to say on Deborah’s inclusion in their Hall of Fame: 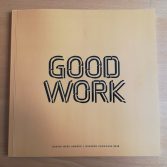 “Deborah Dawton has made a major contribution to the industry on two fronts.

One part of her work involves helping designers and design consultancies establish best practice, so that they can become more effective and aware of their rights, and the other is concerned with raising the profile of design, showing how it can help shape businesses so that they can grow by unlocking commercial effectiveness when design is invested in them.

She has done this on the domestic and global stage for more than 15 years in her current role and like Design Week, the DBA, the organisation that she spearheads, looks to represent the needs and interests of designers.

A four-year stint at BEDA – the Bureau of European Design Associations – saw Dawton work from 2009 to 2013 promoting the value of design and the design economy to the European Union and its contribution to the European economy.

The real task was trying to embed design within innovation across Europe. One marker of the success of this was €6m (£5m) of investment in design-driven programmes.

Dawton, who trained as a designer, spent 10 years in charge of her own design events business, from 1993 to 2003. It was here that she really cut her teeth, running events with and for the likes of D&AD (Design and Art Direction) and the Design Council and the Design Museum.

Today, she knows the industry intimately and is truly an expert. If Design Week ever wants a comment on something important affecting designers, Dawton is always there with a thoughtful and well-considered comment.”

For more details on the Design Week Awards and Deborah and Rama’s inclusion in the Hall of Fame head here.