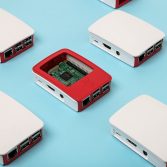 A larger slice of Pi

The ‘Raspberry Pi Official Case’ designed by Kinneir Dufort, proves how potent the addition of design to a technology product can be. Not only did it deliver a new sizeable revenue contribution to the Raspberry Pi Foundation, the cases opened up new ways to use the Raspberry Pi, created new ways to bundle the core products to reach new customers and defined a new visual identity for the product and brand, complementing the Pi technology.

We take a closer look at the DBA Design Effectiveness Gold Award winner and the breadth of impact its delivered to Raspberry Pi.

The Raspberry Pi Foundation’s mission is to put the power of digital into the hands of people all over the world, by providing small, high-performance computers costing just $35, along with resources and training to help people learn about computing.

The Foundation’s Raspberry Pi is the third best-selling computer of all time – behind only Apple and Microsoft. Only the size of a credit card, it’s a small piece of hardware and software that connects to a power supply, mouse, keyboard, display and internet to become a fully functioning computer. It’s a cheap and practical solution for people around the world.

What it needed was a case. This needed to be both functional and elegant to sell as an appealing product. The design also needed to meet some specific requirements: to be simple to assemble with no fixing screws, low cost, appeal to all sorts of audiences, transportable and accommodate a range of inputs. It also had to embody the ethos of the foundation’s mission, showcase the Pi as the hero by providing visibility of the printed circuit board and, ideally, be produced in the UK. 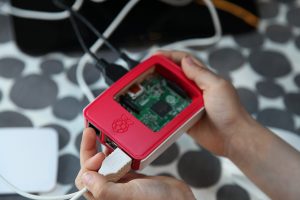 The solution is a set of six high-quality moulded parts that are held together with spring clips. It acts as a roll cage, protecting the pcb (printed circuit board) while providing open access to connectors on the board. A transparent light pipe also lets you see the status indicators. It also has ‘knock-out’ features that allow it to be wall mounted.

From an aesthetic point of view, it is friendly, fun and sleek, mirroring the Raspberry Pi brand. It communicates the clever simplicity of the brand and product, and encourages adaptation and learning. And costing just £6, it helps the brand to maintain its low-cost selling point.

“Every time the Pi is photographed now, it’s in the case. It’s beautiful enough to become every bit associated with Raspberry Pi as the bare pcb”, says Eden Upton, CEO of Raspberry Pi. This is particularly important for the foundation as it helps to maximise reach of the products, which is essential for a charity aimed at helping more and more people become computer literate. 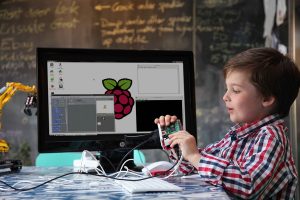 Reviews have shown that the case has been received tremendously well, and it is being used in various configurations. Although it wasn’t the aim to become a brand, the case has strengthened Raspberry Pi’s position by creating a distinct and recognisable visual identity, helping to assert its brand as a leader in an increasingly active hobbyist/maker market.

In just two years from launch, 861,460 Raspberry Pi cases were sold. And encouraged by the success of the case, an even smaller one was developed. Named the Pi Zero Case, it has three alternative lids and sold 130,000 units in just two months from launch. Together the cases generated a total profit of over £725,00 for the Foundation between May 2015 and May 2017.

Since then, sales of the cases have continued to grow, creating longer-term security for the Foundation. Commenting recently, Raspberry Pi’s Director of Engineering, Gordon Hollingworth says, “With over 2 million now sold, the Official Raspberry Pi Case has been more successful than we dared hope. Its affordable beauty embodies the brand, its flexible functionality helps us reach more users, and its commercial success provides a valuable financial contribution to the on going work and mission of the Raspberry Pi Foundation.”

A DBA Design Effectiveness Award win represents independent and authoritative recognition of the value of your work and will enable you to powerfully demonstrate your ability to deliver competitive advantage through design.

“We have always placed a high value on the Design Effectiveness Awards because of the hard measures of success on which they are judged, but also because they recognise the necessary spirit of collaboration and partnership between client and design teams on which all successful projects depend.” Craig Wightman, Chief Design Officer, Kinneir Dufort

“We were delighted to receive a Design Effectiveness Gold Award as robust third party vindication of our decision to invest in design.” Gordon Hollingworth, Director of Engineering, Raspberry Pi