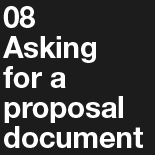 How to buy design: 08 Asking for a proposal document

Depending on how confident you are with your selection of designer, you may just approach the selected designer to develop a formal written response to your brief.

You can in fact ask all the designers you have seen to respond if you have not selected one but this will mean more work. There are proposal scoring templates and feedback proformas in section 7 and 8 to help you manage this process.

Again the proposal document can be used for either briefing an existing agency; as a way of engaging in a conversation with a new agency; as part of a negotiation or as a way of selecting the final designer.

The issue of price will always be at the forefront of any negotiation. The designer will use the brief to work out what they need to do, how long it is likely to take and how much they need to charge for it.

At this point you have two options. Either tell the designer how much money you have in the budget and get them to provide a response that indicates what they would be able to deliver or let the designer come back to you with a figure for the project without any guidance. There are no rules here. It is more likely to depend on the budget available.

If the budget is on the tight side then it may be better to let the designer know. This is likely to save time (and perhaps embarrassment) later. Bear in mind that where you have indicated what the budget is, you are reviewing what the designers can deliver for the money, where no budget has been given you are evaluating what you are getting for the price quoted.

The proposal document should indicate how the designer will carry out the project, the process or methodology they will use, how long they expect it to take, how much it will cost and what the client will actually get for their money, the deliverables.

Where possible the proposal should also suggest who will be involved at each stage, how much time they will spend and at what day rate (if applicable).

The process will differ from designer to designer but is likely to include the following stages; Research, Strategy or Feasibility.

The research here is carried out by the designers, either to better understand the issues faced by the project or to experience first-hand the product, service or experience. This may include a look at what else is happening in the market and your competitors as part of the context for the project.

This research is not to be confused with more formal qualitative or quantitative research that is usually commissioned separately from a specialist in the research area. This should be indicated as such.

Costs can be saved by providing the designers with as much information as is available (including existing research data) or asking the designers what else is required and suggesting that it may be more cost efficient for a member of your staff to collect any data required on their behalf.

The expected output of this stage will be a confirmed brief and a project plan. It is sometimes difficult to confirm this upfront prior to the project formally starting. If added research is being carried out by the designer, then a report of the activity and findings should be specified as a deliverable.

During this stage the designers will explore possible solutions to the brief. The expectation here is that they will present a series of ideas from which one (maybe two depending on money available) will be selected to concentrate on in the next stage.

Typically designers will expect to present up to three ideas or routes to choose from. If you ask for more concepts, it may increase the price for this stage.

However, there is no reason why you cannot ask to see the working drawings, sketches or development models to see how the solutions were arrived at.

The output from this stage is to agree one idea to take to the next stage. To avoid any unnecessary extra costs, the client should ensure that all the decision makers involved in the project are present at the meeting as any change in direction may incur extra fees.

This stage will take the idea selected and work it up to a final solution. What this covers will be detailed as part of the proposal document. This will allow you to agree a final sign-off of the design before implementation.

This is where the final design is delivered either with it going live, to print, to production or communicated to target audiences.

Depending on the requirements of the brief, a designer should have some sort of involvement at this stage. It may be called ‘supervision of production’ or a similar phrase. At some point in the proposal it will indicate where a designer stops designing and starts to oversee the implementation process. It may be that on larger projects a project manager will have been involved and they might be seeing the project through to delivery, but always ask for justification as to how much time’s allocated to see it through.

If in doubt about any part of a proposal document either in the language used, a concept that is not familiar or it is just unclear, ask the designer to clarify to the point that it is understood exactly what is meant to avoid any confusion or disappointment at a later date.

Things to watch for

Proposals will come in a variety of different formats and layouts and will cover most issues. However, there are areas that can be left out or not touched upon until incurred. If they are missing from a proposal ask the designer how they would like to deal with the issues should they arise. Some of these are:

Changes to the brief

The proposal is based on the brief given and any changes, depending on the nature of the change, may render the proposal invalid. It is wise to ask the designer to indicate the likely impact of the change BEFORE making the decision to change. This could be a timescale problem as well as a financial issue.

The same holds true for design changes where a solution is settled upon, but perhaps due to other project members’ input, it needs to be changed. If a change needs to be made, again discuss the cost and impact before requesting it. The earlier in the project the changes are made the less impact it will have on the project overall.

Meetings and decisions should always be recorded either in the traditional set of minutes or in the form of a contact report from the designer. If there is a project manager this will be their responsibility, if not it will fall to the designer to write. However, think about the possibility of an internal team member drafting the minutes to reduce the cost.

The designers will have allowed for a series of client meetings per stage of the project. If this is not clear, ask. If unscheduled meetings are called be aware that the designers are incurring costs each time they leave their office to visit your premises. Costs can creep up if you request meetings that were not planned for.

This issue should be partly covered in the agency selection process and applied to the distance and therefore the time taken for the designer to get to and from the client. If the distance means that the designer will spend more time travelling than in the meeting, ask how they will be charging for this. Some may have a travel rate but others will expect the client to pay the standard day rate. Splitting the meeting venues between the designers and the client’s sites can reduce cost.

Mark up and bought in items

The proposal should indicate where needed how the designers will deal with bought in items. These include services that they may not have in-house such as copywriting, photography or website programmers. It may also include specialist researchers or consultants depending on the type of project being undertaken.

The designers may mark up the service either under a ‘handling fee’ and a percentage will be applied or they will allocate extra ‘project management’ time to look after the bought in resource. If this is not clear ask and perhaps negotiate. Typically percentages are in the range of ten to fifteen percent.

Different types of expenses will be incurred as part of the project. These are likely to include materials and travel as well as items such as couriers. Expenses are variable and difficult to estimate up front. Ask for an estimate but it will always depend on how the project is running and the demands the client puts on the agency. Extra presentation boards or more colour run outs will be charged and thought should be given to the option of post against courier especially if the distance or urgency does not warrant it. Always ask for a breakdown of expenses in the invoice from the designer and that the designer clears any large or unusual expenses first as it may be more practical for the client to buy direct in some cases.

If in doubt about any part of the process or you have questions that are specific to what you are trying to achieve, ask the DBA, who will almost certainly know someone who will be able to answer your questions or help in the process.