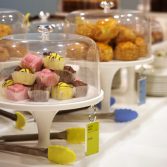 Back in time: M&S café – looking through the glass

Marks and Spencer made its triumphant return to Brussels last year, in the swish Toison d’Or development.

As a mark of M&S’s confidence in its in-store café offering, the light, airy café space designed with a premium feel, was placed prominently – front and centre – in the flagship store. A few years back, things could have been very different.

Back in the late-Noughties M&S cafés were unloved and unlovely. Frequently concealed behind high walls or buried at the back of the store – or both – they were uninviting, utilitarian affairs and by 2008 were battling declining sales, dwindling customer numbers and low staff morale against a back drop of crunched credit and tightened belts. Yet the 132 year-old retail giant recognised the value of its café estate as a means of driving footfall and wider store sales and was committed to improving it. The key was to get customers to linger longer to exploit the direct correlation between dwell time and sell time.

M&S turned to interior designers KIWI&POM to help address the wide-ranging problems presented by the then café design. The M&S hospitality team and agency collaborated closely on a thorough review of the product, equipment and layout, and undertook a radical rethink of the customer journey. 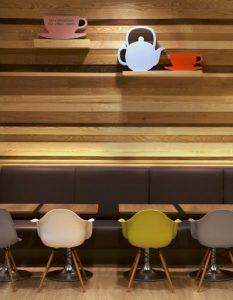 The resulting design represented a strategic shift from ‘coffee to cake’, from snaking queues to logical layout and greater efficiency, and from separatism and concealment to reconnection and unity. The design results were both immediate and long-lasting. Sales soared, customer satisfaction levels rocketed and staff satisfaction reached an all-time high.

The first new look café launched in Westfield Shopping Centre, White City in October 2008. The striking interiors theme, based on the Mad Hatter’s Tea Party, created an appealing narrative throughout the café and provided a welcoming environment, with a strong identity and efficient operational flow. Inviting booth seats replaced the high dividing wall between the café and the rest of the store, reconnecting the two areas and making the café easier to locate and more enticing to visit.

To further encourage customers to stay and enjoy, the focus was moved from providing a quick coffee to offering indulgent treats with M&S’s cakes and patisserie centre-stage. The previous long, linear queuing problems were solved by a new logical layout, speeding and simplifying the customer journey, thus making ones progress from counter to table more enjoyable. A designated tray clearing pass vastly improved staff clearing efficiency, helping both staff and shoppers alike.

And critically for a business with such a wide range of store sizes, iconic design elements such as cake pedestals and 3D icons, enabled the café concept to be scaled up and down without losing its design identity. The agency provided M&S with four layout formats – from small to extra-large – that were successfully and cost-effectively rolled out across the estate. All on a design budget of £100,000.

In the first 18 months after launch, sales in newly fitted out cafés increased 26 per cent versus a 10 per cent uplift across the existing estate, with an additional £10 million sales delivered over plan. What’s more, there were happier customers and staff, with mystery shopper scores jumping from 65 per cent to 85 per cent and staff satisfaction measures topping 95 per cent for the first time, a leap of nearly 20 per cent on store average.

When you factor in that the average build cost per site dropped 50 per cent – from £1million to £500,000 – it’s no wonder M&S took notice of the potential for design to turn around the performance of its café environments, to widen their demographic appeal and to encourage customers to shop longer.

Here’s what M&S’s then head of hospitality Jason Danciger had to say about the success of their foodservice in 2013: “We’ve had five years of solid growth in the grimmest recession. Why? Because we’ve kept driving innovation in that time.”

Now it is easy to see why the once ignored in-store café takes such pride of place in prime retail.

The M&S café in Brussels was also designed by Kiwi & Pom. 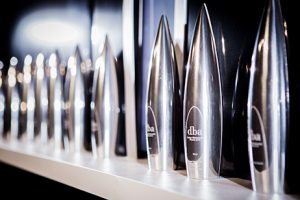 Irrefutably prove the value of your design work to business.

Judged by business leaders and entered jointly by client and designer, the DBA Design Effectiveness Awards are both rigorous and authoritative. They celebrate the power of design to drive business success and provide compelling proof of why design is a sound commercial investment.